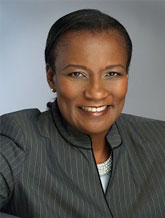 Denise Burgess
Chair of the Board
President and CEO, Burgess Services

Denise Burgess is President and CEO of Burgess Services, Inc., a Denver-based construction management firm. She has served on the Board of Directors of the Denver Metro Chamber of Commerce since 2010, and will become the first African-American Board Chair of the Chamber in September 2017. She has been listed in the Top 25 Most Powerful Women by the Colorado Women’s Chamber of Commerce, a Woman of Distinction by the Girl Scouts of Colorado, and a recipient of the Dr. Martin Luther King Jr. Humanitarian Award and the Davide E. Baily Small Business Advocate Award.

Armed with a bachelor’s degree in journalism from the University of Northern Colorado, Denise launched a promising career in broadcast management. She was called in 1994 to work alongside her father and business mentor until his untimely passing in 2002. Denise’s career skyrocketed after she transitioned her father’s heating and air conditioning business into a nationwide firm, specializing in construction management, commissioning, and quality assurance/quality control. Burgess Services’ accomplishments during her tenure include the City and County of Denver Justice Center, the Corp of Engineers Southeastern Headquarters in Miami, and the Westin Hotel at Denver International Airport (DEN). Burgess Services was awarded the largest contract ever awarded to a black-owned business — a $39.6 million mechanical contract at DEN.

Denise credits her continued support from family and friends as part of her success, along with her dedicated employees. Never taking anything for granted, Denise regularly takes time out of her busy schedule to give back to the Denver community both personally and professionally. The Burgess Family Fund was established through the Denver Foundation in 2013 with a goal of funding the education of minority women interested in STEM and construction. The Burgess Family Fund has donated to over a dozen Colorado organizations.