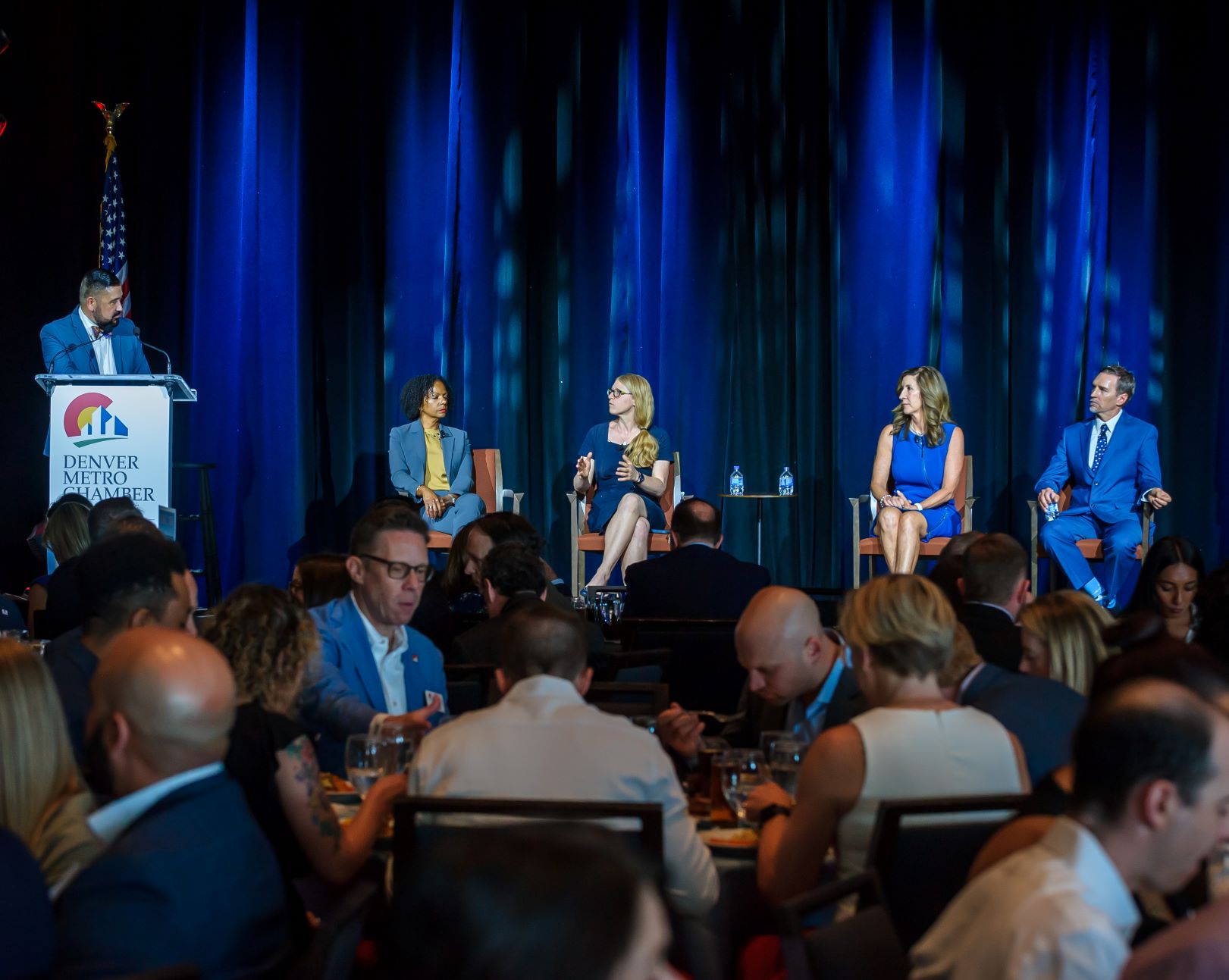 DENVER – The Colorado business community heard from expert transportation and infrastructure panelists and the Denver Metro Chamber of Commerce at the Chamber’s 2022 State of the City address. The event, presented by United Airlines, provided a platform to discuss the current state of the transportation industry, as well as the goals and priorities for the future.

The event also celebrated United Airlines’ 85th year of service in Denver. As a “birthday” celebration, United distributed prizes to event attendees and discussed United’s commitment to Denver and sustainability during their sponsor remarks. After their new lease at the Denver International Airport (DEN), Denver is now the largest hub in their system, giving them the ability to fly about 700 flights out of Denver a day. As the largest private employer in Denver, United also plans to expand their employee base from 7,000 to 10,000 in three to five years, and has the goal to be carbon neutral, without using offsets, by 2050.

“We’re excited to celebrate 85 years here in Denver,” said United Airlines’ vice president of the Denver Hub, Matt Miller. “But today is less about the past and more about our future. We’ve invested in our people, our customers and the community of Denver to be the best hometown airline we can be.”

The panel featured a variety of transportation and infrastructure community leaders. Raymond Gonzales, EVP for the Denver Metro Chamber of Commerce and president of the Metro Denver EDC, moderated the discussion. Gonzales was joined by Debra Johnson, general manager and CEO for the Regional Transportation District; Shoshana Lew, executive director of the Colorado Department of Transportation; Mayor Jackie Millet, City of Lone Tree and former Chair of the Metro Mayors Caucus; and Michael Sheehan, senior vice president of Special Projects for DEN.

During the panel, the conversation focused on the use of federal and state dollars for infrastructure projects, crime and safety on public transit, fair pricing of transit costs, collaboration between the organizations on increasing public transportation accessibility, sustainability goals and efforts of each organization, and the EPA’s non-attainment reclassification for Metro Denver and the Northern Front Range.

The panel lasted for an hour, and at the end, all panelists were asked, “If you had a magic wand to remove one obstacle to achieve the vision you have for the Metro Denver region, what would that be?”

Johnson focused on having a robust public transportation network. Stating that we don’t currently have one, Johnson said she doesn’t look at other transportation services as being competing, but complimentary. She stressed the need to collaborate across networks and organizations to properly serve communities.

Lew stressed that many needed projects aren’t addressed until damage has been done. Lew said that many important issues are known ahead of time, but it often isn’t until irreversible damage has started that any one takes action.

Mayor Millet’s big barrier were construction defect litigation issues. She emphasized that we all want to attract and retain talent, and in order to grow her own community, she needs more affordable and workforce housing options.

Sheehan’s desire was to continue resilience and sustainable growth for the region. He stressed that DEN is 27 years old, and many of the systems and processes are outdated. DEN’s goal is to continue their growth in a sustainable way as they prepare themselves to meet the needs of their travelers.

The Denver Metro Chamber of Commerce’s president and CEO, J. J. Ament, gave closing remarks, summarizing the Chamber’s insights on the state of Metro Denver. Ament focused on limiting government restrictions on businesses for Colorado, specifically mentioning the EPA non-attainment reclassification as a burden for Coloradans.

Ament stated, “The Chamber, who helped regulate the original Air Quality Commission, knows how critical our environment is to our economic success and physical health. But we also know that burdensome and expensive regulations that don’t actually solve problems facing our businesses, residents, or even the environment, are unwise.”

Ament continued to say that the Chamber is leading a coalition against the EPA reclassification. The coalition is in pursuit of more, “pragmatic, scientific and less economically damaging approaches to continue the substantial emissions reductions we’ve seen, and maintain and improve [Colorado’s] air quality.”

There was also mention of the Inflation Reduction Act, the large reconciliation deal recently passed by Congress, with Ament emphasizing the move of Space Command headquarters from Colorado to Alabama. “If we really want to address inflation, part of that is reducing unnecessary spending, such as spending $1 billion to move something that’s part of our community,” said Ament. The move of these headquarters impacts nearly 1400 Colorado jobs and many have called for the move to be challenged.

Ament closed by emphasizing that collaboration between the private and public sector is needed for innovation and growth, and he stressed, “We will strive to strike that balance to both protect our environment and our economy. We can do both at the same time.”

About the Denver Metro Chamber of Commerce